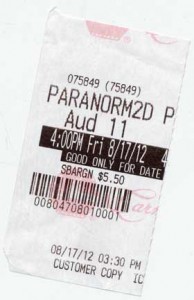 I went to see ParaNorman last Friday (on the day it opened, of course), and it was fantastic. It was well written, well animated and well paced. It brought up the subjects of bullying and mob mentality, and addressed them without hitting you over the head with a sermon.

Norman also solved the main problem of the movie by confronting it rather than putting a Band-Aid on it and kicking it on down the road. But more than that, he confronted it by talking to it rather than using violence. Conflict resolution: what a unique idea. I’ll have some more, please.