Next year (next month!) I’ll be participating in the wildly successful Sketchbook Project, put together by the Art House Co-op and the Brooklyn Art Library. I know, I know, I sure waited a long time to jump on the wagon, but at least I’m not falling off of it. I posted my first sketch in an earlier post. 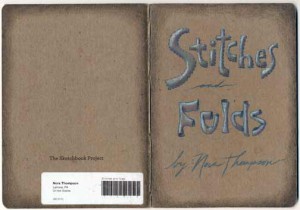 We had to pick “themes” for the sketchbooks, and the one I picked was Stitches and Folds. I thought I could do something cool with that idea. My first page from the sketchbook is actually the cover, and here it is (ta-da):

Each image will include some sort of stitch or fold (in the drawing of it, not an actual stitch or fold, which I played around with and discovered didn’t work so well) opposite a page with a song lyric that I think goes well with the image.

I rebound (rebinded?) my sketchbook (you’re allowed as long as you follow their rules) with some toothier paper (theirs was too smooth and too white), so the stitching on the spine is mine (and part of my theme).

What was I thinking?