When I grew up, I remember thinking my mother and Shirley Jones were equals. She (Shirley Jones, not my mother) grew up in a small town (Smithton, Pennsylvania) that was pretty close to where I grew up (although my mother grew up in a town that was even closer), which I thought was terribly exciting and made the two of them practically sisters.

I wasn’t quite six years old when The Partridge Family debuted, but I was instantly in love. I wanted to be in a band. My dad told me later that the reason I played drums in school was because on that very first episode a little girl drummer showed up Chris Partridge on the show. I don’t remember it happening that way, but I believe him that it did. 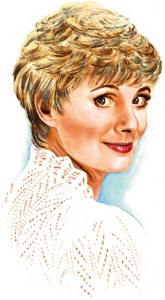 Anyway, the point of this was that I ran across this painting I did of Shirley Jones from way back, maybe ten years ago. For those of you who follow this blog and have seen my work, yes, it was in fact painted by me. Acrylic on bristol. Before I escaped to the dark side.